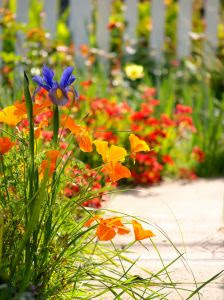 Amelia and Helen got ready.

“We can’t be late,” said Amelia who rustled about like a bag of shredded paper. ”I’m sure he’s expecting us.”

Helen nodded in complete agreement while adjusting the festival of feathers that was her hat. “He always liked this hat,” she said.

Elsewhere a man sat up in bed. “I’m leaving today,” he said to the empty hospital room.
Across his bed, slivers of sunlight were created by the half closed blinds. Yet from that window he could see marigolds, roses and tulips. Their colors spoke to him of spring and beauty and life.
Amused by the silly and curious chatter of the squirrels, his whole body was a convulsion of chuckles. The birds, he didn’t know what kind they were, settled on the bird feeders. He could hear their staccato pecking at the food.

He reached one gnarled hand up to his weathered face and wished he’d gotten a shave beforehand. “Too late for that now,” he thought as he inserted his gleaming false teeth. His hair was a perfection of grey snarls – too late to do anything with that either.

At least he was clean. Clara, his home health aide, had always seen to that. She was a great lady, making trips to the hospital even though she didn’t have to and was not paid for such. She came every few days if only to visit with him. He would miss her.

He loved to hear her shuffling footsteps coming down the hall and seeing her ample frame squeeze its way through the doorway. She was like a locomotive slowing down for the next stop She was not just an employee - she was something more but just what it was, he could not name.
He never heard his Aunt Amelia and Aunt Helen, his favorites, come into the room. They were just as he remembered. When he saw his Aunt Helen’s hat, he was as gleeful as a little boy. His giggles belied his 92 years.

“Aunties – I knew you were coming. I dreamed of you both – so I knew.” The sound of his voice startled him. After the stroke, speaking had not been possible-yet here he was doing just that.
“Good dear. You’re ready then.” Helen said. “Everybody is waiting to see you.”

Maxwell rose from the bed and, taking their hands, began to dance to a waltz not played in more than fifty years and heard only by them. And then they were off, spinning and spinning some more, upward to and through the clouds like butterflies set free.

Their laughter rolled over the gardens and reached the birdies and squirrels. The flowers saluted them with gold, maroon and yellow petals which danced on the waves of the wind before fluttering back to earth.