Then All Was Oblivion 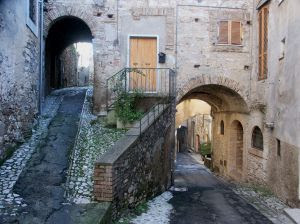 His cape afloat behind him, the man stumbled down the street a mumbling, incoherent hulk. He didn’t know what time it was though the autumn evening allowed just enough moonlight for him to see.
His head ached and his chest burned-or was it the other way around?
Usually his body, containing a given amount of absinthe, reacted so sweetly. Thus, he concluded, he was not full of the drink. and why he had not taken a carriage home, he didn’t know. Why had he made the supreme error of walking on legs as uncooperative as the laces on a woman’s corset?
He decided to sit on the curb for just a moment before laboring on. In response, his stomach revolted and sent out an abundance of foodstuffs eaten hours before. He felt better. Try as he might though, he could not stand.
A blurry someone approached him, saying something he couldn’t understand. He fainted again and began to commune with the occupants of his expansive and tortured dreams.
He vowed to never leave them.

The October 10, 1849 issue of the Baltimore Clipper newspaper devoted an entire column to the death of the writer Edgar Allan Poe who had been found unconscious on the sidewalk days before.

This is my undoing, my ending.
My mouth will no longer say anything- let alone goodbye.
I know that your hand grasps mine as does your heart.
That I do not move or speak, means nothing.
I know you are here. I know you are with me.
Soon, I will escape this prison.
I will be a big part of what you remember and a big part of what you may want to forget.
My love for you is a great as the sky and just as beautiful.
My thanks to you is bigger than any world, and just as beautiful.
I will know you always. This goodbye is only temporary.
I will be waiting joyously.
I will be waiting - just to say hello to you again. 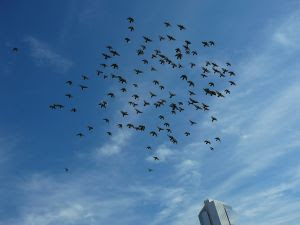 In southern bound undulation,
they float on unsteady breeze -
their black wings
stretching to the horizon.
Their path
lengthy
and
rising
and
dipping,
then rising again...
Chased to the far beyond
by frost and damp and inner
timepiece.
Their disappearing cries beg us believe
that as surely as the sun will rise again
they too shall return -
on the other side
of winter.