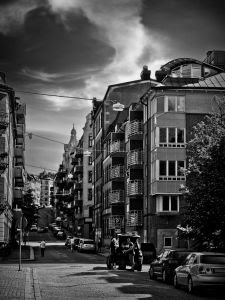 I wish I had closed the door

I first heard the footsteps
ten days after I moved in.
Just after midnight,
strong firm, exacting.
On the stairs.

Along with my cold feet.
I put my head under the covers and
shut my eyes as if the dark
or could protect me.

Last night when all was finally quiet
with all my strength
I yanked my head out
and peeked.

And what stood before me?
What smokey, faded, remnant
of nightmare remembered
waited?

Edging closer, it had no name
that I knew.

I wish though
Oh I wish that
I had never opened my eyes and that
I had closed the damned
door. 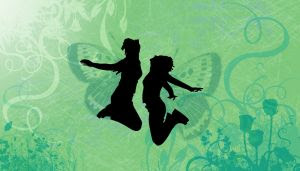 They saw each other on the first day of school. Their eyes met and it was like-well-fate. They were drawn to each other. After only a few days, they started meeting at every free moment.
She tried to remember the first kiss.
She couldn't recall how it began but she could clearly remember how it felt. She hadn't felt butterflies like this before.
He remembered everything from that first tentative touch, the smoothness of her skin-yeah all of that.
At some point they convinced themselves of their unhappiness when apart from each other. He talked to her about how his parents didn't understand how he could be in love. She talked about how her parents wouldn't understand their love. A very real distinction.
The idea of running away together began as just that an idea, but the more they talked about it-the more real it became. They planned to do it during the prom. Who would notice? They would be gone far away by the time anyone noticed. They were right.
They'd made it almost to the state line when, at a rest stop, they were recognized. The next day the authorities sent them back where they belonged.

From the Channel 5 Evening News:

According to the Gracetown Police Department, Chuck Ford and Elizabeth Tobias were found as they attempted to cross state lines. The boy, 16, has been returned to his parents who had reported him missing when he didn't come home after the High School Prom. Elizabeth Tobias, 45, and a teacher at the school, is the custody of the county on charges of, among other things, child endangerment and kidnapping.

It Is A Small Thing

It is a small thing perhaps.
I straighten his tie and peek to see if
his socks are on right.
No shoes needed for this journey.

They got the part right-his hair glistens
as if
dipped in stars.

Is he smiling?
He wasn’t when I found him-

hanging in the closet-
he of angled head and
blackened tongue and
bulging eye.

He wears his only suit now and
I straighten his tie.

It is a small thing.
Perhaps.

Jeremy had perused the Lixcht studies in great detail for months and according to them, this was not supposed to happen. He had conducted his experiments after work in his own home lab with great success. However, when subsequent work by the respected Dr. Lo, of the famed Carlyle University suggested and then demonstrated flaws in those early studies, Jeremy had acted quickly, if reluctantly.

Unprepared for even the slightest potential of the so-called sentient experiment, he put a stop to it in one fell swoop (or pitch, as it were), into the depths of the murky pond near his house.

Now, in the deepening darkness he heard it. The loud slurping movement along the grassy bank could only mean one thing: It had found its way out and it was bigger now. Much bigger.

Roaming from room to room with the steps of the deliberate, he stopped to peek from a window.

The moonlight revealed a wet, sticky-looking slime shining on the road below. Sweat glistened on Jeremy’s forehead and his palms were slick as well. His feet refused to move.

He thought he saw something, although the unkempt grasses and reeds barred his clear view. The bass drum in his chest beat relentlessly; the pain in his head would not stop.

He’d said it was a beautiful result of chemicals, chaos and care. He would talk to it, sometimes for hours at a time, urging it to grow. He whispered to it in tones admiring of its gorgeous colors — many shades of green and gold — its several eyes and glorious legs. He would often stroke its cool, shiny speckled skin. He’d done other things, too, and these things had pleased it enormously.

It looked up, and upon spying him standing in the window, saw in his eyes an invitation of sorts. Surely that’s what it was.

Experiment gone bad, indeed, it thought as it morphed into something exceedingly flat and slid easily under the door.